The Ship Building Simulation is a powerful, yet simple exercise to introduce a group of people to the concepts of flow based work systems. Through practical experience the participants learn and understand the importance of Work in Process (WIP) limits and end-to-end optimisation.

This simulation was developed and made popular by Klaus Leopold from LEANability. It is described in Klaus’ book Practical Kanban. 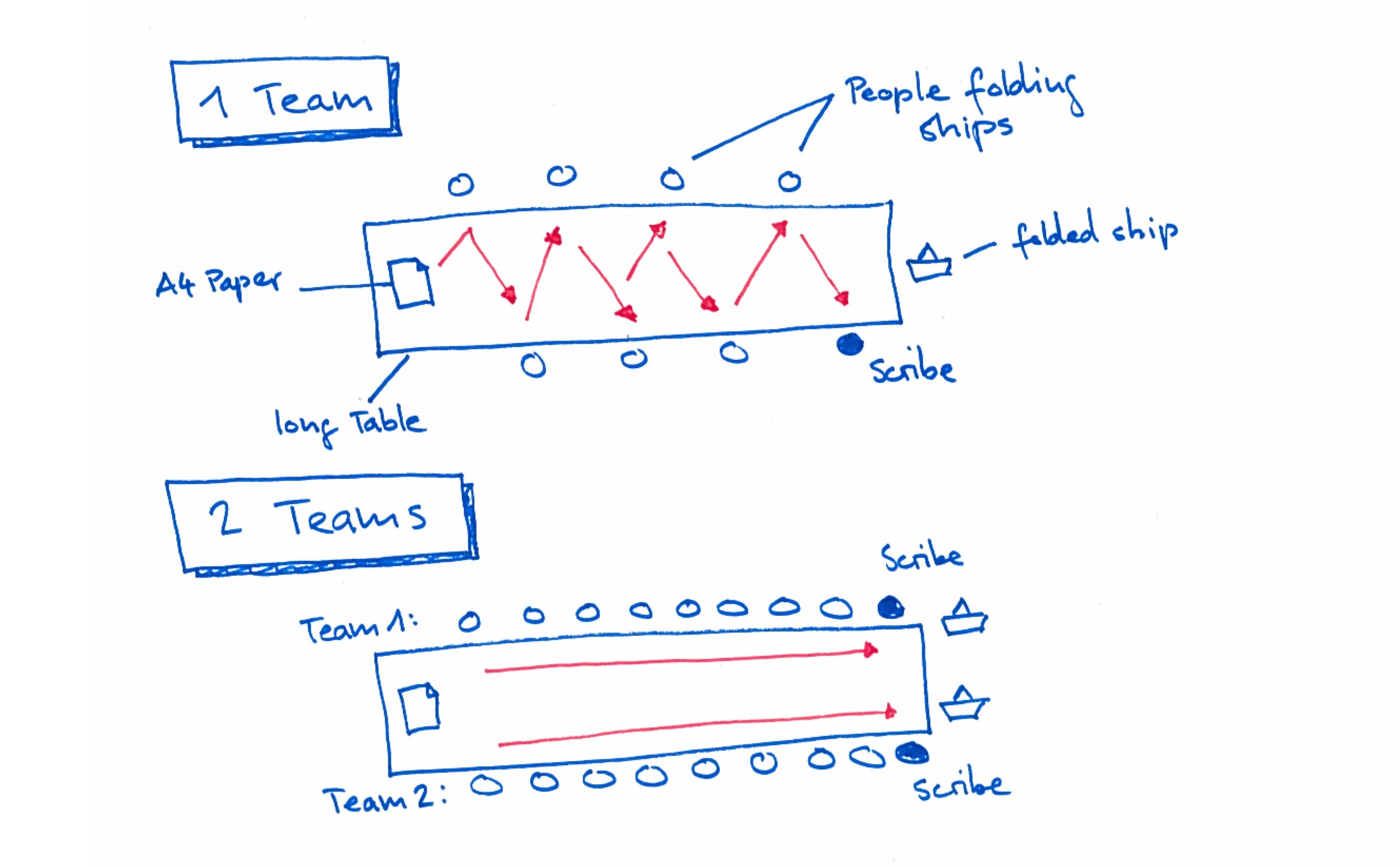 Instruct the folding process for the ship. Each participant should perform a folding step for the ship. Make sure, that the last person performs several foldings steps, so as to have a bottle neck in the process.

The last person in the row, the scribe, will do the paper work and write down the arrival time of each ship. That is, we will start a timer and each time a ship is finished, the person writes down the time on the the stop watch. Make sure that the person writes down the timestamp as shown on the timer, demonstrate it on a piece of paper and remind them not to do any calculations. Experience shows that many people write down lap times instead of timestamps if not instructed properly.

The image below shows the foldings steps necessary to build a ship. Make sure that the last person, the one sitting next to the scribe, performs all the folding steps marked in red. Experience has shown that it is best to place the bottleneck at the end of the manufacturing line. 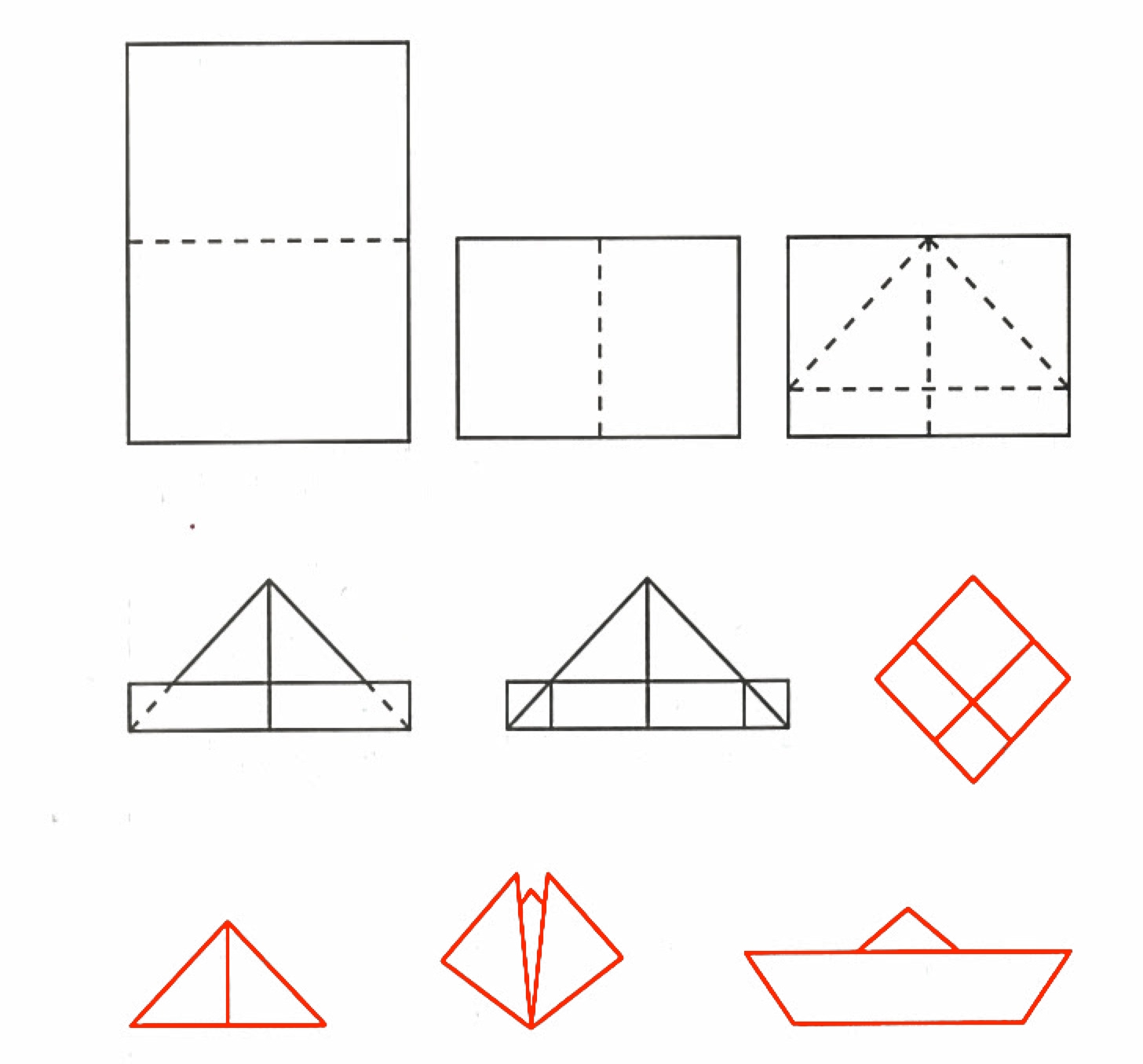 There are three simple rules:

Round 1, System 1: Unlimited WIP and Push

Round 2, System 2: Limited WIP and Pull

In this round we add a new rule:

In contrast to the first round, we should never see ships piling up in front of someone.

Tell the participants, that you think the company went out of business because in the second round no one was working. Most people were holding their hands up in the most of the time.

Ask the participants what they think — in which system did the company earn more money? Also tell the participants, that in round 2 you observed many people holding their hands up in the air and thus not working. And in round 1 everyone was working all the time.

Analyse and Discuss the Metrics

Immediately write the insights on flip chart for later reference.

Introduce the term throughput and fill in the numbers in the table above. Calculate the average throughput of both systems.

Highlight the observation: in system 2 the team was able to deliver the same amount of ships per minute (throughput) despite many people holding their hand up in the air and not working on folding ships.

Insight
When we set limits, we have enough time for the work we never have time for.

Insight
When we set limits, we become more predictable.

Priorities and their Pitfall

This is a thought experiment for system 1.

Insight
When everything is important, then nothing is.

Insight
The later we begin, the better for the customer (late commitment).

Note that when you order a new car you will be told two dates: the first date is the date when the ordered car starts into production (start date). The second date is the date when the car is shipped (start date + production cycle time). The customer can change the configuration (e.g. air conditioning, leather seats, etc.) at no additional cost up until the start date. Because the car manufacturer works in system 2, he can predict the shipping date with high accuracy.

Insight
We cannot complete more work, even if we work faster.

Put this to a test: validate the equation using the collected metrics. For round 1 and 2 divide the average “Work in Process” by the average “Throughput” and compare the result to the measured “Cycle Time”. The numbers should be roughly equal.

The corollary of Little’s law is that one can have all of the above benefits by just limiting WIP. As one can see in this simulation, the throughput will remain constant, that means that the work system introducing WIP will deliver just as much as before and the lead times will improve — at no additional cost: with the same way of working, the same people and the same resources.

Compare this to the rate limiting traffic light in front of the Gotthard Road Tunnel.

This is a ship building simulation as described in the book Practical Kanban by Klaus Leopold.